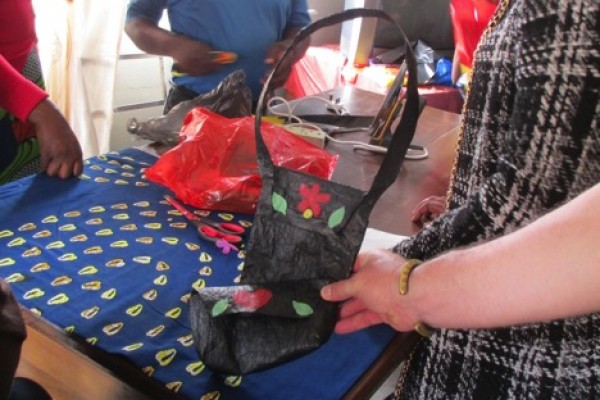 Funding in part by Pennywise, Power of Love in Zambia, and Doane College.

The goal of the project was to teach local women associated with the Power of Love in Zambia how to reuse and redesign single use plastic shopping bags.  The bags can be turned into mosquito netting for windows and doors, permanent bags, hats, rain coats, backpacks, hammocks, rope, rugs, bed mats, etc.  Most of the products can be made from scraps or worn out shopping bags, making this an ideal system to not only generate money and, cut down on incidents of malaria, but also clean the environment around the Matero suburb of Lusaka.

Quick results:  More than 250 people were trained during 10 days.  The bulk of the training occurred while working with the POL staff.  Though some training occurred at the two main city markets, one mall and with several NGO staff members staying at the backpackers we stayed in.

In detail:  We had three main training groups.  Each group came for a total 2 days each (though some ladies came more often).  The first, POL staff spent two days training, learning and experimenting with the plastics (8 people).  I also worked with one of the staff members in charge of the sewing machines at St Marry’s Church/school/compound (this was where the classes were held).  On the 4th day we held a morning and afternoon class.  Each class had about 50+ people.  We found that many of the ladies could not come for a second day as they needed to plant crops and tend to the gardens. So on the 5th day, members of both groups (morning and afternoon) came back for a longer morning session.  This longer session only had 50-60 people.   The 5th working day was a Friday.  The POL staff didn’t feel that many, if any people, would show as the ladies had much work to do over the weekend.  So no work was done Saturday and Sunday.  I worked with people in the two big markets in Lusaka as well as training staff from various NGOs staying at the backpackers on those days.  (While people are always interested in the project at markets, there is no chance for follow up or to even answer questions once the audience goes home.)  On Monday and Tuesday of the next week, we followed the same pattern of seeing about 100 people the first day and 50-60 on the second day.  In addition to the groups of ladies arranged by the POL staff, we had one school group show up on the last day.  They were brought in by a mother who was volunteering at the school and thought the kids could help pay for supplies by learning how to make bags.  The front of the church had many children walking by.  At every opportunity we pulled them in.  Boys were particularly interested in making rope and swings, while the girls were working on making flowers and bags.

One of the biggest hits among the older women was learning how to make plastic yarn (called Plarn) from the bags.  They all complained that they could no longer crochet due to the costs of yarn.  Several bags and table mats were crocheted in the course of the classes.

The main skills taught at each training were how to make the base material and how to make a bag.  I have found that once people learned how to do this, they can easily expand into other ideas.  Other skills included rope making (for belts, rope, swings, and rugs), the making of plarn, and the making of flowers to ornament bags, clothing and hair.

Dr. Elder's Review: This is by far the most successful project I have worked on in the 6 countries I have traveled through in Africa.  That was all due to the support of the POL staff.  Usually I show up in a town for a few days and teach at the local market or a school.  There is no follow up, and never time to answer questions so that people may learn more.  The few times I have had people arrange for me to teach, no supplies were there, no chairs, no room and often no people.  Arranging all that is not a trivial matter.  The POL staff was able to not only get all the material asked for ahead of time, but planned on the need for a morning to get all the late minute supplies and to fix/overcome obstacles.   Communication is always hard by e-mail and it was difficult to let Chris Mulela and Patricia Mwale know what I was envisioning and what they were envisioning.  All three of us knew it was going to take some planning.  We decided that it would be best if the staff was trained well enough to each lead a group of 5-6 ladies during the classes instead of me teaching one big class.  The staff stepped up and did a great job.  On the first day with 100 ladies, we found that all but one of the power outlets were dead.  The staff tracked down enough power strips to hold 4 smaller groups of 12 ladies each.  The staff worked together to team teach each group.

As always, the mosquito nets take a back seat to making items that can be sold for money.  This is true for every class I have taught.  This is true for many reasons.  The nets are ineffective if the family lives outdoors, if the perception of malaria is more like that of the flue, if they are perceived to be hot, too hard to make, or just don’t make money.  Like seatbelts and texting while driving here in the US, education seems to be the key.  And despite the known dangers, without long term education, Americans are likely to keep texting while driving.  The same appears to be true for mosquito nets.  That is, I would expect 5-10% of the participants to pick up the plastic project and give it a shot as a money maker.  With the POL staff that number might be as high as 50% as they can continue to work with the ladies to improve their projects and think about reaching markets.  The nets will take longer but the POL staff has a better chance with this group of ladies than I have ever had with any group I have worked with in the past.

Final thoughts, the project was very successful.  Particularly in light of the fact that a lot of the planning needed to take place on the day I arrived.  Continued support may only need to be helping ladies see how to market their goods to locals and tourist (this could include on line sales.).  I would suggest working with Ester and getting her thoughts on how best to move forward.  I have a few students interested in doing an internship in Africa and I’ll be pushing them towards the POL.