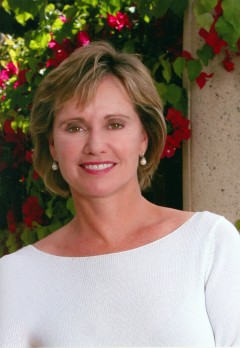 Lynn LaBreche Hamilton met the co-founders of Power of Love in 2000 when she represented them in the purchase of their home in San Diego. A few years later, learning of their work in Zambia, Lynn introduced Power of Love’s work to the San Diego Downtown Breakfast Club of which she is a long-time member and past President. The International Services Committee was impressed by the impact made by a small San Diego based Foundation and it has been a wonderful partnership since then with global, district, and committee grants each year supporting the provision of a comprehensive health care package, and micro loans to vulnerable women and children in Zambia.

Lynn grew up as one of seven children in an Air Force family who moved to a new state almost every year. The clan finally settled in New Orleans after her father's military retirement where Lynn finished high school at the Academy of the Sacred Heart and then attended college at Louisiana State University. With a degree in interior design, Lynn moved to Houston, Texas during the oil and economic boom of the late 1970s and had the opportunity to work on several significant projects with some of the nation's leading architectural and interior design firms. Ready for a change and thanks to a willing brother with a spare bed, Lynn fulfilled her California dream in 1985 and moved to San Diego where she met her husband, Peter, a year later. Her career in design continued until 1999 when she entered real estate sales.

Today Lynn is the proud mother of two successful sons and lives in Coronado, CA with her husband of over 30 years. She is still very involved with the San Diego Downtown Breakfast Rotary Club, serving on the Board many times and as President in 2011-2012. Lynn is honored to be on the board of the Power of Love Foundation.

Board of Directors
Donate Now