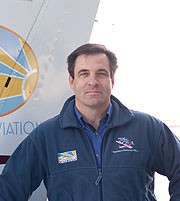 A graduate of Wesleyan University in 1991 (Classical Civilization), Zeke’s lifelong passion for aviation led him to his first position at a small aircraft start-up in Idaho. Shortly thereafter, the company folded and he switched to a more established company, outside of aviation, in California. He rapidly worked his way through several Operations and Finance positions.

In 1999, Zeke got married and consequently moved. He stayed in the technology industry, joining Organic Inc., a San Francisco based e-commerce consulting firm. He rapidly grew dissatisfied with the nature of the work and decided the time was right to leave the corporate world; aviation was calling.

After much analysis, Zeke determined there was an opportunity to build a business in the flight training industry. From 2000-2002, Zeke received additional training, worked for an established flight school, and conducted market research. In February 2002, he started his own flight school business in Providence, RI: Horizon Aviation. Since then, the business has grown, has two locations, and is the market leader in both areas. Additional locations will be added as opportunities arise.

As Horizon Aviation became reasonably secure and established, Zeke was looking for an opportunity to contribute to the world-at-large, outside of Horizon. This led him to be on the Board of the Power of Love Foundation.

Board of Directors
Donate Now